On March 4th there was a none alcoholic celebration of the founding of URENCO in the Capenhurst staff canteen.

While we were outside the plant holding a none celebratory event.

Upon assembling at the entrance to the plant we noted two French vehicles with radioactive markings on them.

As we left there was a radiation reading taken from them.

These reading and a report of the event are to be found of the Radiation Free Lakeland website.

50 Years of “Enriching the Future”

Protesters call for Capenhurst nuclear plant to be closed down.

The UK government has published the following set of guidelines.

Some of the processes that operators will need to follow when shipping radioactive sources to and from EU countries will change from 1 January 2021.

It makes for some interesting reading.

We will be back leafleting again at the DRS open day event in July.

Marking holding an event to mark the anniversary of the 63nd Anniversary Of The Windscale Fire on October 10th.

There is no question but there are very real concerns about the lack of transparency surrounding Capenhurst’s activities  the adequacy of nuclear safeguards at Capenhurst Environmental and public health risks associated with Capenhurst’s routine operations as well as incidents and accidents Capenhursts management of uranium hexafluoride.

If anyone wants to know just what the ONR [ Office for Nuclear Regulation ] has to say about the ongoing disaster at Fukushima, then they should read the following: –

Fukushima and the UK nuclear industry

That report was penned in 2011, and they have added nothing to it since then.

In contrast Kick Nuclear has been producing the regular Fukushima Updates.

The latest of which is to be found here.

More on Uranium exports to Russia.

As we keep saying: –

These sales raise many very worrying concerns, while the details of these exports are surrounded in secrecy.

July 21st was the 5th time that we have gone to a DRS Open Day event.

This year, despite our not being able to get more activists to turn up on the day, we did never the less managed to hand out some 2,500 leaflets in just under four hours.

While inside the depot there was a nukiller waste train wagon on display.

You can view them upon just some of the youtube videos of the event here, here, & here.

What strikes us about this is that DRS are now aiming to normalise seeing these waste flasks.

Next year we will be at the DRS Open Day at Carlisle, where we will be organising a protest in the company of our fellow activists from Radiation Free Lakelands.

Radiation Free Lakeland [ RFL ] has sent an urgent to Sellafield, asking them to monitor and retrieve radioactive particles from St bees beach ahead of the Cumbria Wildlife Trust ‘Beached Art’ day on Sunday August 4th.

Sellafield have treated this straightforward request under Freedom of Information rules which means that there will not be a reply for at least a month, and even then they might have to pay for the request to be answered.

The request has been sparked by a citizen science project carried out by Radiation Free Lakeland volunteers in collaboration with nuclear science undergraduates at Worcester Polytechnic Institute in the US.‘

In the absence of any warnings from the authorities, RFL will once again be at the beach at St Bees to leaflet and warn people about the very real possibility of their children (or pregnant mothers) ingesting radioactive cesium, americium and plutonium.

We will be back at the Springfields plant to mark 61 years since the Windscale Fire.

The next DRS Open Day will take place at their depot at Carlisle.

We will be back to leaflet the event in the company of our fellow activists from Radiation Free Lakeland.

Come Join us as we tell the tale of Thomas and his mates!

Distribute this information outside any of the railway stations which Thomas passes through. 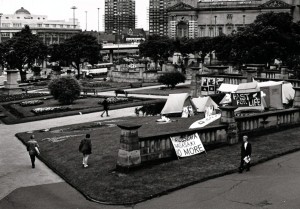 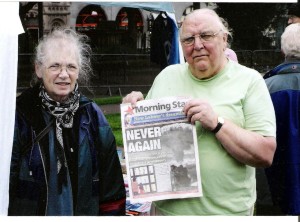 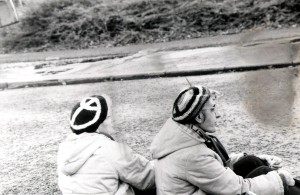 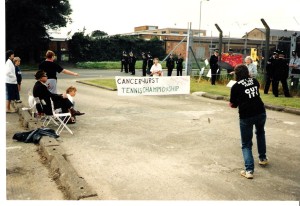 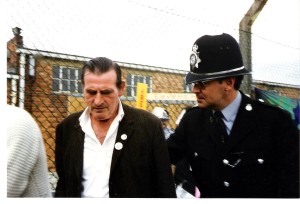 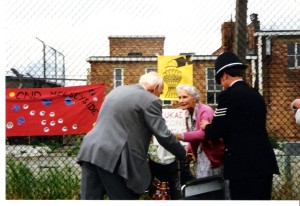 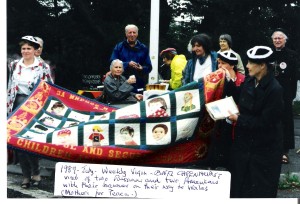 The weekly Capenhurst vigil in July 1989

Part of the Snowball campaign in April 1987

As an alliance of groups and individuals, we declare our total and uncompromising opposition to URENCO and in particular to the supply of enriched uranium by URENCO to the military dictatorship in Brazil.

Brazil has refused to sign even the Nuclear Non-Proliferation Treaty, and has made no secret of its intention to manufacture “Peaceful” nuclear bombs.

The supply of enriched uranium is a particularly clear example of the way nuclear power threatens all living creatures and their natural environment, concentrates power in the hands of a
few, necessitates a military style secrecy and undermines the principles of human liberty. This deal would be another irrevocable step towards a future of which we want no part.

Our stand is in defence of the health and safety of ourselves, future generations, and all living things on this planet.

We therefore demand an immediate halt to –

1. The plans to supply enriched uranium to Brazil.

2. The marketing of nuclear technology by URENCO.

We declare our determination to –

1. Provoke public discussion about the operation of URENCO and all its contracts.

2. Prevent the importing of uranium mined in violation of the land rights of people anywhere in the world: e.g. Australia, Namibia and Brazil.

And Announce that we are prepared to take all non-violent steps necessary to achieve these ends.

From the Activist Archive —-

published by WISE Bulletin in July 1978

Australia and Japan are discussing a joint project for uranium enrichment. This is a logical step for Australia, with its key position as world supplier. But it needs help with the heavy cost of an enrichment plant. Japan, totally dependent on out-side supplies, is the obvious partner. The most likely technique is the centrifuge, and URENCO (them again !) have offered their help with building it. Delegations from the Australian Atomic Energy Commission and the Japanese government and Power Reactor and Nuclear Fuel Development Corp. met on April 19 for talks. They set the second half of the ’80s as a target date.
Source/ MAUM 277 Brunswick St., Fitzroy

On June 24,400 people took part in a first demonstration against the URENCO centrifugal enrichment plant at Capenhurst. This was the outcome of a determined effort to spread opposition to the British-Dutch-German project. Capenhurst (Cheshire) is a twin plant to the one at Almelo, expansion of which was decided at the end of June (See Politics) despite major Dutch opposition. It is feared that some or all of URENCO’s commitment to supply enriched uranium to Brazil could be met from Capenhurst. The British partner in URENCO has been pushing for its share of the deal – despite the lack of guarantees that Brazil will not make weapons.

Some 60 Dutch and British activists got together during the demo. against the Torness reactor, in May, and the “Stop URENCO Alliance” was formed, made up of Greenpeace, CIMRA, FoE local groups, SCRAM (opposition to Torness), SERA, and anarchist groups. The Capenhurst demo. is the first stage in a campaign to inform UK opinion. (In a recent parliamehtary debate, the UK foreign secretary muddled enrichment and reprocessing, and no-one reacted !).