C.C.C. has just produced two new campaigning leaflets.
One is about the relationship between Capenhurst and the proposed nearby fracking site at Upton.

The second leaflet is Chester Beware!.
Trains pulling containers of highly-radioactive used fuel rods (“Nuclear Trains”) regularly go through Chester on their way up to Cumbria.

These waste trains are operated by DRS [Direct Rail Services] which transports this highly radioactive waste through some of most highly populated area in the UK.

– Where exactly is Capenhurst?
It is 5½ miles north of Chester, 2½ miles from Ellesmere Port, and 10 miles south of Liverpool.

– Who owns the Plant?
It is part of URENCO which operates similar plants in both Germany and the Netherlands.

– What exactly goes on in the plant?
It is a Uranium Enrichment plants and thus a key element of the Nukiller Fuel Cycle.

– So can you explain exactly what you mean by the nukiller fuel cycle? 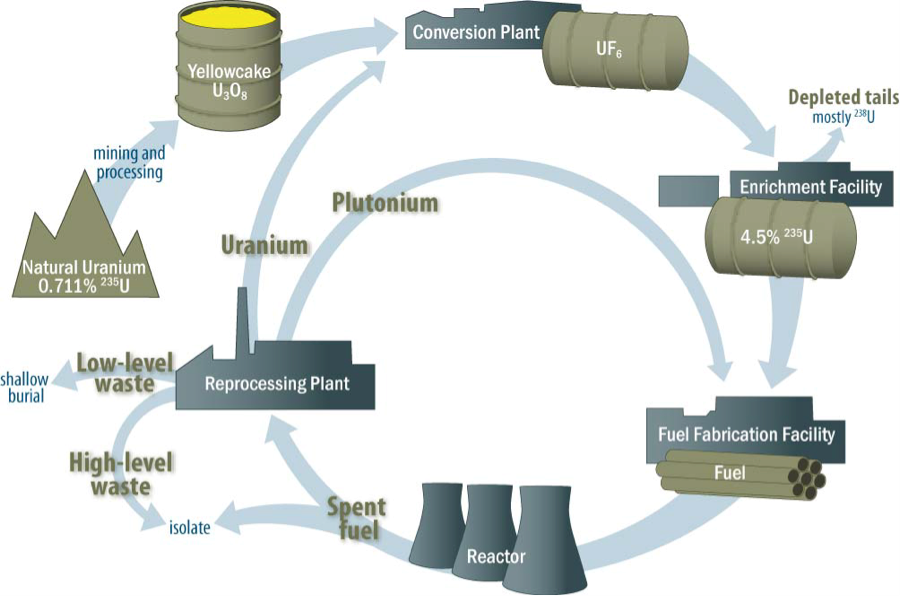 – Where is the Uranium mined?
The Uranium is mined in counties such as Australia, Canada and Namibia.

– How exactly does it get to Capenhurst?
It is shipped by sea to Ellesmere Port, and then taken by Road to Capenhurst.

– What Happens next?
It is enriched and converted in to uranium Hexafluoride.

– Where exactly is the enriched Uranium transported to?
Once enriched it goes by road to the Springfields plant at Preston where it is converted into fuels rods.

– By Road?
Yes by road. The company which transports this uranium Hexafluoride by road is
Advanced Uranium Asset Management Ltd. These loads are so dangerous that there is a prohibition on them being transported through the Mersey Road Tunnels.

– So what happens to the depleted Uranium?

There is very little which can be done with it and so it is currently stored in drums at the plant. It is this depleted Uranium which has been used in ammunition shells, and is the cause of Gulf War Syndrome.

– So isn’t anyone doing anything about that?
The Campaign Against Depleted Uranium is working on the issue. There are many health dangers which come from an exposure to Depleted Uranium, especially if it is stored as a uranium Hexafluoride.

– That sounds very dangerous.
Yes, very much so! Normal functioning of the kidney, brain, liver, heart, and numerous other systems can be affected by uranium exposure because, in addition to being weakly radioactive, uranium is a toxic metal.

– How does that effect children’s health?
Children have a greater vulnerability to radioactivity than adults.
At Capenhurst there is a primary school within 150 metres of the URENCO plant.

– Are these children being regularly monitored for exposure to radiation?
Not as far as we can tell.

– So what exactly are the greater dangers which are caused by use of enriched Uranium in nukiller reactors?
If something goes wrong with these plants they can cause a major nukiller disaster.

– Do you mean something similar to the continuing nukiller disasters Chernobyl and Fukushima?
Yes – Just so.

– But that’s so far away from here!
That’s not so.
The nearest atomic reactors to Capenhurst are at Wylfa in North Wales and at Heysham on the outskirts of Lancaster.While high level radioactive waste from Wylfa is transported in special flasks through the Chester railway station on a regular basis.

– So what exactly are these high level waste flasks?
These trains carry used, but extremely radioactive, fuel rods to Sellafield in
Cumbria for reprocessing.

– How long will it take to clean up this waste?
There is a backlog of radioactive waste at Sellafield which goes back to the 1950s. The present proposal is to build a high level waste depositary. This will contain plutonium which has a half-life of 24,000 years. We will have to safeguard this waste for thousands of years.

– That’s a long time. It’s much longer than most people can imagine!!

– So how much will this waste cost me as a tax payer?
We just don’t know. Within a very few years some 75% of the Department of Energy and Climate Change [DECC] budget will be used to look after this waste.
Given the huge scale of the waste our great great great great grandchildren will still be paying to safeguard this waste.

– Ok. I can see all the potential dangers, but doesn’t the Capenhurst plant produce urgently needed local job?
Not so! About 450 full-time employees work at URENCO. That’s a quarter of what it used to be. There’s a much higher number of jobs which can be created by a major programme of
energy conservation, and the use of safe power sources like solar or wind power

– So how many new jobs will be created by the use of these clean energy technologies and the use of good thermal insulation?
In the period 2012-2013 the global number of people employed by the solar industry increased by 14%. 103,000 people were working in the UK renewable energy sector in 2012/2013.

The UK wind, wave and tidal industries employ 18,465 people. At the present rate more than 70,000 jobs could be created in these industries over the next decade.
There would be many more such jobs if money was not being used to subsidise the nukiller industry.

– But wouldn’t that mean building big ugly wind turbines in the middle of
the countryside?
Not necessarily so. Ideally energy should be generated near to where it is being used. The ugly power lines which cross the countryside lose power in transmission over long distances, and so there should be less of them in use. Vertical Wind Turbines and solar panels are ideal for use in our city centres.
While home insulation and other energy conservation measures will cut the amount of power we need to produce.

– Ok, so you have now convinced me.
Great!

– So what can I do to close the Capenhurst plant? 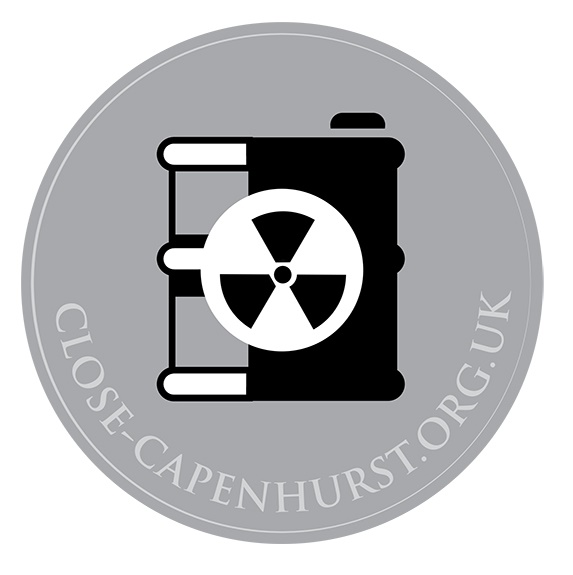 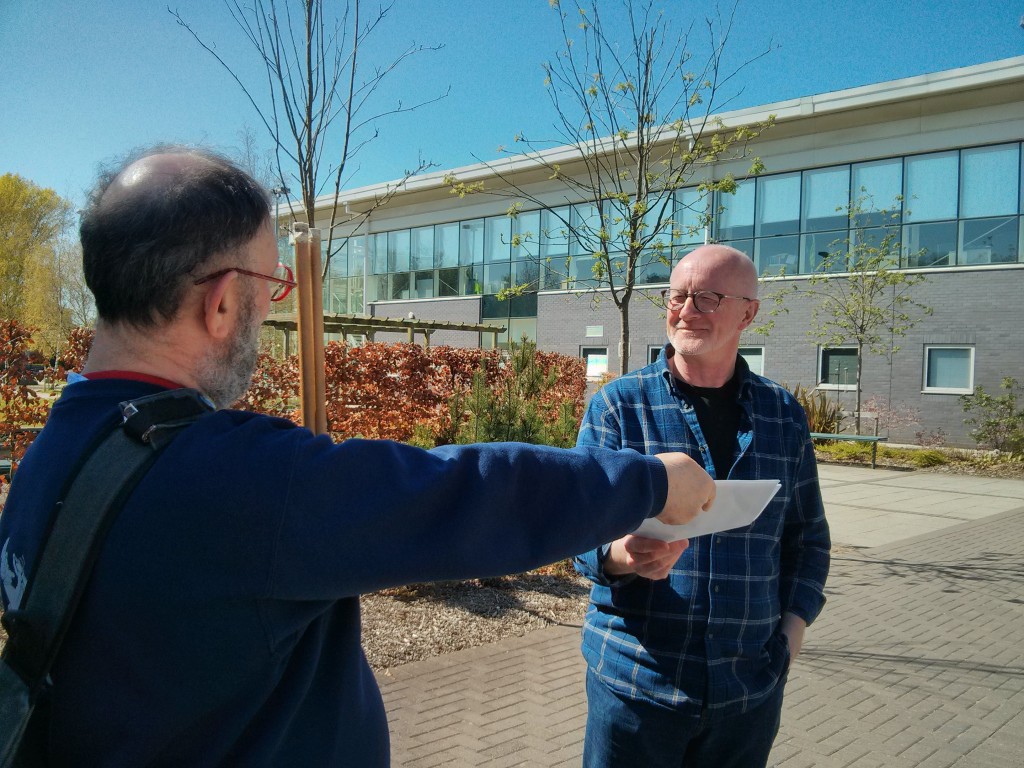 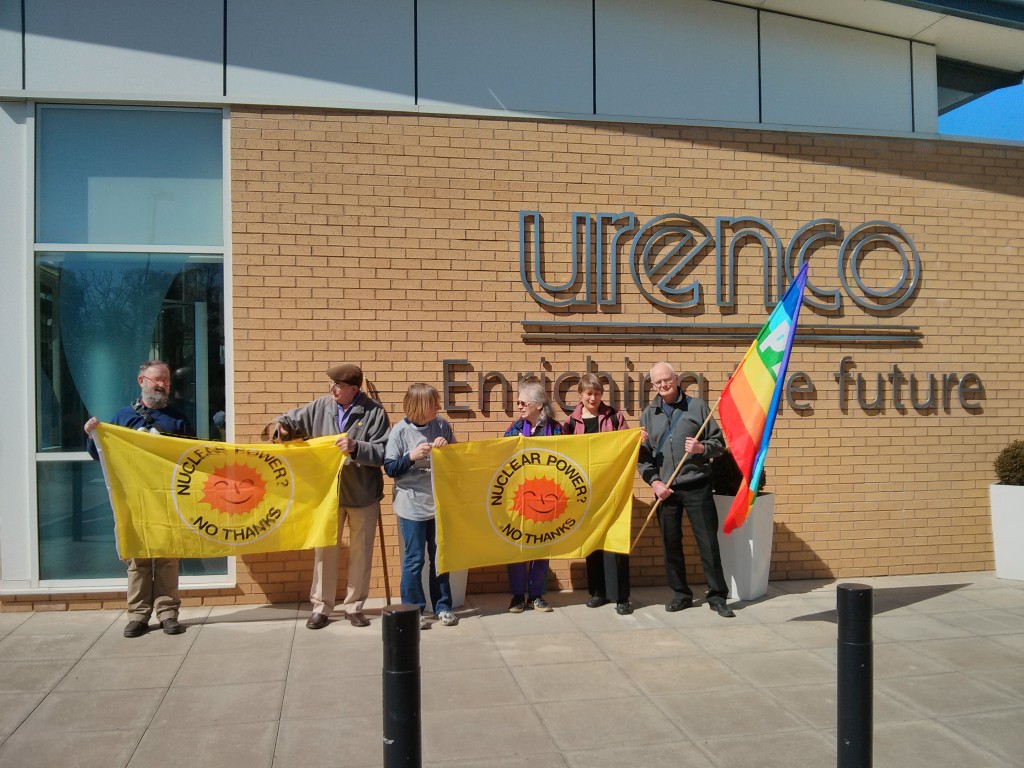 As a clear, transparent way of showing just how dangerous Capenhurst, and other plants like it, is we will be using Geiger counter to discover how much radiation the place is releasing in to the surrounding environment.

The message is simple and straightforward: Capenhurst, uranium enrichment and nuclear power pose such great risk to the world that must be abolished!

At the same time our fellow activists in Germany will be holding a demonstration at Gronau which is located close to the German/Dutch border in North-Rhine-Westphalia and roughly 40 kilometres from Urenco’s Dutch enrichment plant at Almelo.

This demonstration will take place over the Easter weekend and we’re hoping that a lot of people will be there with us. As part of the action we will be handing in the Close Capenhurst petition which you can sign now in to the plant.
More information will be posted over the coming weeks.

Please take a moment sign the Close Capenhurst petition calling for the shut down of the uranium enrichment and storage facility. We will hand the petition in to Capenhurst at the demonstration on April 11th and the Office for Nuclear Regulation on March 11th to coincide with the third anniversary of the Fukushima Daiichi nuclear disaster.

For more information about Capenhurst please explore this site!
Thank you!